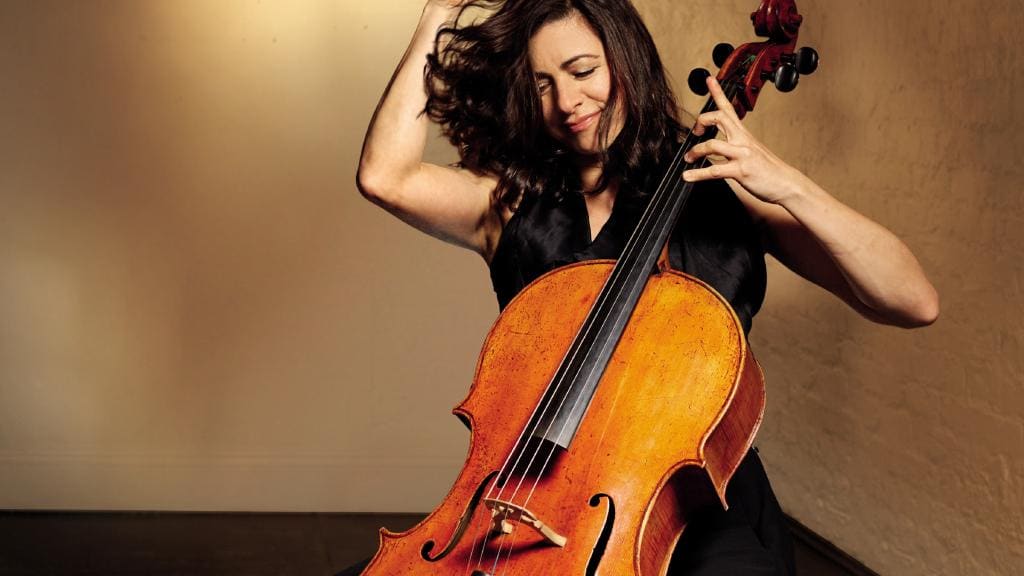 Described by the Times as ‘mesmerising’ and ‘soaringly passionate’, British cellist Natalie Clein has built a distinguished career, regularly performing at major venues and with orchestras worldwide.

She records regularly with Hyperion, and has recorded the two Cello Concertos by Camille Saint-Saëns as well as Bloch’s Schelomo and Bruch’s Kol Nidrei with the BBC Scottish Symphony Orchestra to great critical acclaim. A solo disc with works by Bloch, Ligeti and Dallapiccola was released on 27 January 2017 and awarded Diapason d’Or. She has previously released 3 discs for EMI.

In the upcoming season, Natalie Clein tours Australia, the USA and Ireland, and performs a programme of Beethoven cello works at Festival Cervantino with Marianna Shirinyan. In the UK, she returns to Wigmore Hall and Eaton Square and gives recitals in Cardiff, Nottingham, Bournemouth and Jersey. Concerto dates include Bloch’s Schelomo with Opole Philharmonic.

The 2017/18 season saw Natalie Clein perform as part of the Utzon Music Series at the Sydney Opera House, Haydn’s D Major Cello Concerto with the Salzburg Chamber Soloists in Brazil and the Recreation Orchestra Graz, Elgar’s Cello Concerto with Collegium Musicum Basel, Brandenburgische Staatsorchester Frankfurt and Philharmonia, and Beethoven’s Triple Concerto with the Insula Orchestra and Laurence Equilbey for International Women’s Day 2018. She was a judge in the 2018 BBC Young Musician competition, and performed in a special BBC Prom celebrating the 40th anniversary of the competition. She also toured South America with Sergio Tiempo, and recorded Dobrinka Tabakova’s On the South Downs with BBC Concert Orchestra at Truro Cathedral, and her new disc for Hyperion, with works by Frank Bridge and Rebecca Clarke.

Further recent highlights include performances as part of the Cello Unwrapped Series at London’s Kings Place the world premiere of Sir John Tavener’s Flood of Beauty at the Barbican Centre with the Britten Sinfonia, Bloch’s Schelomo with the Orkiestra Symfoniczna NFM and Benjamin Shwartz in Wrocław, and performances at the Stavanger Chamber Music Festival in Norway.

A keen recital and chamber performer, she has recently performed Bach’s Complete Cello Suites in London, Southampton and Oxford; and has curated a series of four concerts for BBC Radio 3 at LSO St Luke’s.

She regularly works with contemporary composers such as Thomas Larcher and Brian Elias and has also curated and been involved in cross-disciplinary projects with the dancer Carlos Acosta, writer Jeanette Winterson and director Deborah Warner amongst others.

In 2015, Natalie Clein was appointed Artist in Residence and Director of Musical Performance at Oxford University for 4 years, taking a leading role in concert programming, in developing new artistic projects, and in introducing new modes of teaching. A Bach project began in the autumn of 2016, along with visits from a number of leading contemporary composers.

Born in the United Kingdom, Natalie came to widespread attention at the age of sixteen when she won both the BBC Young Musician of the Year and the Eurovision Competition for Young Musicians in Warsaw. As a student she was awarded the Queen Elizabeth the Queen Mother Scholarship by the Royal College of Music. She completed her studies with Heinrich Schiff in Vienna. Natalie is a Professor at the Royal College of Music London and Music Academy Rostock. She plays the ‘Simpson’ Guadagnini cello of 1777.