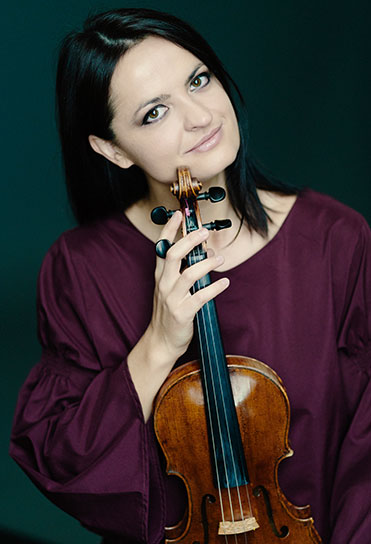 Violinist Lana Trotovsek has won admiration for her expressive playing and unique musicality. Washington Post has described her as ‘Radiant’ and praised her ‘clean, refined tone with musical sense of phrasing and impeccable intonation’.

She has captivated audiences with her ‘warm sound and formidable technique’ (La Vanguardia) and her talent of bringing ‘freshness, depth and insight’ to her interpretations.

Since her debut in with the Mariinsky Theatre Orchestra under Valery Gergiev in 2012, Lana Trotovsek appeared with some of the world’s finest orchestras.  In 2014, she toured with the Moscow Soloists and Yuri Bashmet and in 2016 she performed Prokofiev’s Violin Concerto No.1 with the London Symphony Orchestra under Gianandrea Noseda. Her recent schedule has included performances under Tan Dun with Orchestra Teatro Verdi, the Shanghai and Slovenian Philharmonic, as well as under Uros Lajovic with the Sarajevo Philharmonic Orchestra, the RTV Slovenia under George Pehlivanian, the Kalamazoo Symphony Orchestra, the Qingdao Symphony Orchestra and the Chamber Orchestra of Philadelphia, where she was described as “an emerging voice to watch” by Philadelphia Inquirer. In 2016/17 Lana performed double violin concertos with Sergey Krylov and the Lithuanian Chamber Orchestra on a number of occasions including the Al Bustan Festival in Lebanon in 2018. In 2017 she toured with John Malkovich and I Solisti Aquilani, performing Bach’s A minor violin concerto in festivals Emilia Romagna, Ljubljana, and Mittelfest.

Trotovsek has performed at some of the most prestigious venues, including Wigmore Hall, Vienna’s Konzerthaus, Teatro la Fenice in Venice, Amsterdam’s Concertgebouw, Muziekgebouw in Eindhoven, and Shanghai Oriental Arts Centre.  Her talent has taken her beyond Europe to perform in China, Japan, the UAE, Canada, and the USA.

Trotovsek was born in Ljubljana, Slovenia, to a family of musicians.  At the age of 4, she began playing the violin under the guidance of Majda Jamsek.  When she was 17 years old, her prodigious talent was recognized by Ruggiero Ricci who mentored her at the Academy Mozarteum in Salzburg.  During this period, she continued her studies at the Academy of Music, the University of Ljubljana with Volodja Balzalorsky and Primoz Novsak.  In 2005, her passion and skill were rewarded with the Prešeren Award, the highest university award for arts in Slovenia, following her performance of the Khachaturian Violin Concerto with the Slovenian Philharmonic Orchestra under George Pehlivanian.

Between 2006 and 2011, she was a member of the Greenwich Piano Trio with cellist Stjepan Hauser and pianist Yoko Misumi.  They won the Solti Foundation Award, The Tunnell Trust Award and other first prizes in chamber music competitions across Europe. They were guided by the Beaux Arts Trio cellist Bernard Greenhouse and pianist Menahem Pressler as well as Stephen Kovachevich.

Trotovšek continued her studies at Trinity College of Music with Vasko Vassilev, Boris Brovtsyn, and Rivka Golani, and at the Royal College of Music with Itzhak Rashkovsky, winning many prizes. Between 2011 and 2013, she was the first violinist of the Badke String Quartet, winners of the Melbourne International Chamber Music Competition.

Lana Trotovšek lives in London and is a Professor at the Trinity Laban Conservatoire of Music and Dance, where she completed her postgraduate studies in 2009.  She maintains close ties to her home country where she performs regularly and is a visiting Assistant Professor at the Academy of Music in Ljubljana.  She plays a 1750 Pietro Antonio dalla Costa violin.