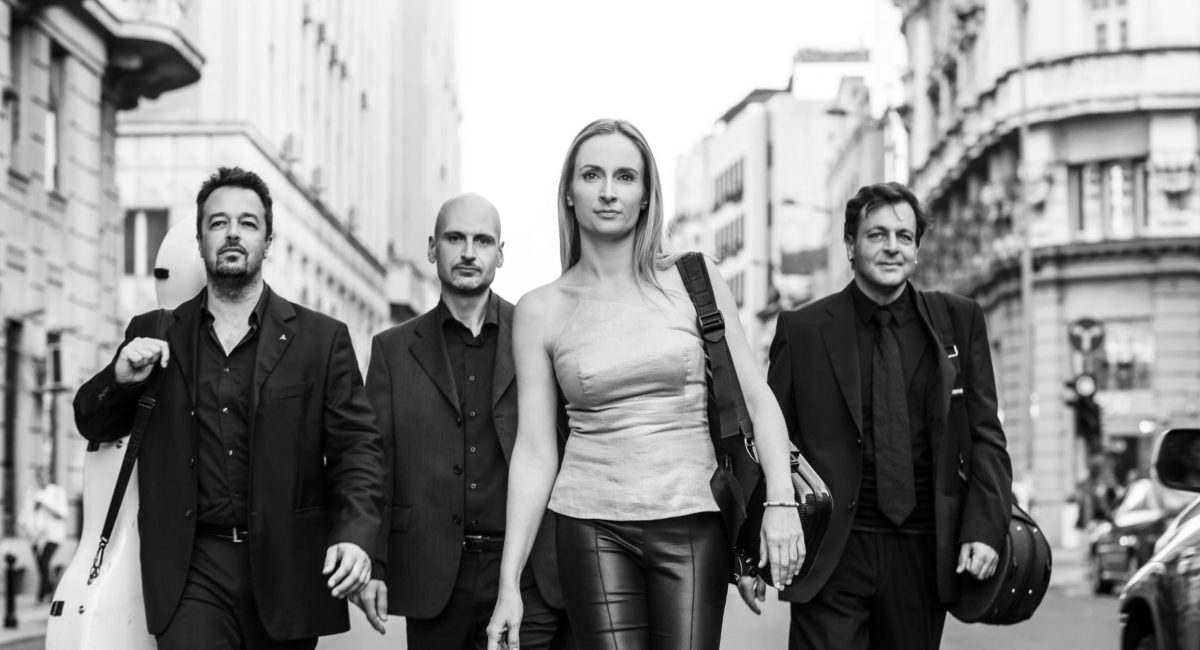 The members of the Belgrade Philharmonic String Quartet are: Jelena Dragnić (first violin), Vladan Lončar (second violin), Boris Brezovac (viola) and Aleksandar Latković (cello). The ensemble was founded within the orchestra in 2011.
The Quartet’s latest achievements include concerts at events such as Silver Lyra Festival in St. Petersburg (Russia), Musikfesttage an der Oder (Poland/Germany), the Abu Dhabi Classics Festival, the season-opening of the Chamber music in Desert, at the Liwa Oasis, in the United Arab Emirates, then two concert tours in China, performing at Tianjin Concert Hall, followed by concerts at the Centre Culturel de Serbie, in Paris, and the Cultural Centre in Izmir, Turkey.

In July 2017, the Quartet also performed at the Ljubljana Festival. It recently had its premiere in Montenegro, featuring “Viaggio in Italia“, by Giovanni Sollima, with cellist Maja Bogdanović and actor Vladimir Aleksić. In the previous period, the Quartet performed at the Festival of Mokranjčevi Dani in Negotin, the Festival Espressivo in Cetinje, the Sarajevo Evenings of Music (SVEM), the Modern Gallery in Podgorica, the SOMUS Festival opening in Sombor, Serbia, and Filip’s Days Festival in Niš, and gave a concert at the National Theatre in Banja Luka, Republic of Srpska on the occasion of the Day of the city of Banja Luka. In addition to these performances, the Quartet’s concert at Studio 6 Belgrade was broadcast live by the Serbian Broadcasting Corporation Channel 3.

During the 2015/16 season the Quartet members were mentors for their young colleaguеs at the Winter String Quartet Workshop in Podgorica, and at the Montenegro Summer Chamber Music Camp at Ivanova korita, Lovćen.
In June 2015, in cooperation with clarinetist Ognjen Popović, the Belgrade Philharmonic String Quartet released their first compact disc containing compositions by Ludwig van Beethoven and Johannes Brahms.
In the season 2013/14, the Quartet and their guests appeared in a cycle of five chamber music concerts named Quartet+1, in the Belgrade Philharmonic Concert Hall. In addition to compositions for the string quartet, this cycle also included quintets with two violas, with clarinet, piano and voice.

In the season 2012/13, the Quartet gave a memorable performance of a “Concerto for String quartet and Orchestra” by Erwin Schulhoff at the Kolarac Great Hall, with the Belgrade Philharmonic Orchestra and their Chief Conductor of that time Muhai Tang.
Other performances in Serbia and the region have taken the Belgrade Philharmonic String Quartet to the opening of the Classic Fest Pančevo, the European Day celebration in Belgrade, the Conference “Creative Europe” at Kulturni Centar Grad, concerts on board the Amadeus Royal ship on the way from Vienna to the Black Sea, concerts in Gračanica, Kragujevac, Inđija, Mostar, and Trebinje, as well as the appearances in Gornji Milanovac, Subotica, Vršac and the village of Stanišor in Kosovo and Metohija, as part of humanitarian and social responsibility projects of the Belgrade Philharmonic.
The quartet worked with prof. Wolfgang Redik (Vienna Piano Trio) and prof. William Coleman (Kuss Quartet).
They performed with artists such as Jorg Winkler, Claudi Arimany, Darko Brlek, Maja Bogdanović, Ognjen Popović, Veljko Klenkovski, Branko Kabadajić, Jelena Draškoci, Svetlana Jovanović…